Shift is a plugin that creates animated spectral shifting effects. It is based around a step-sequenced envelope generator that allows to easily construct sophisticated patterns that are sent to control either a frequency shifter or a ring modulator. This finely-tuned setup produces a wide range of interesting effects: from gentle inharmonic detune and chirping, to extreme spectral-thinning and metallic zaps - with intricate pulsations in perfect sync with input audio. 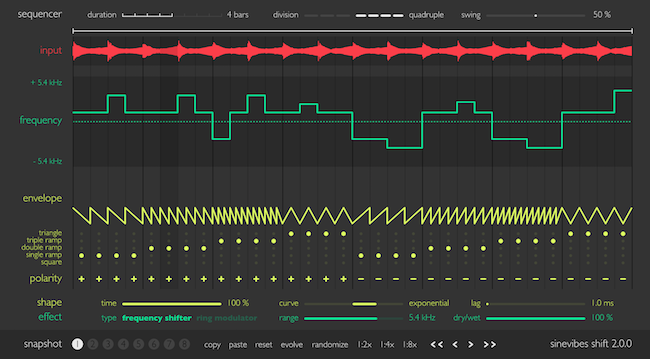 Shift displays a live sound waveform and aligns its sequencer graphics with it – exactly in the same way it’s done by the sound engine, for true “what you see is what you get” operation. Every element in its user interface is color-coded and features subtle animations, bringing unusual ease of use and interactivity. Plus, all this goodness is rendered right on your Mac’s graphics adapter meaning fast response and no extra load on the main processor, regardless of how new or old your system is.

Shift is yet another excellent little plugin from Sinevibes [..] with huge creative potential and a great sound – 4.5 stars, Computer Music / 2013
Shift on Ambient Pad  0:36
Shift on Minimal Loop  0:29
Shift on Synth Bass  0:29