Singularity is a delay effect unlike any other. It starts with a tempo-synchronised feedback delay line capable of true stereo panning, and its tail is then sent into three extremely capable effect units connected in series. Each of these processors includes a rich selection of different algorithms: from filters, phasers and choruses to digital- and analog-style distortion, frequency shifter and granulator. In addition to all this, Singularity has four modulation generators for parameter animation – all of which lets you create extremely sophisticated, out-of-this-world delay, echo and even reverb effects. 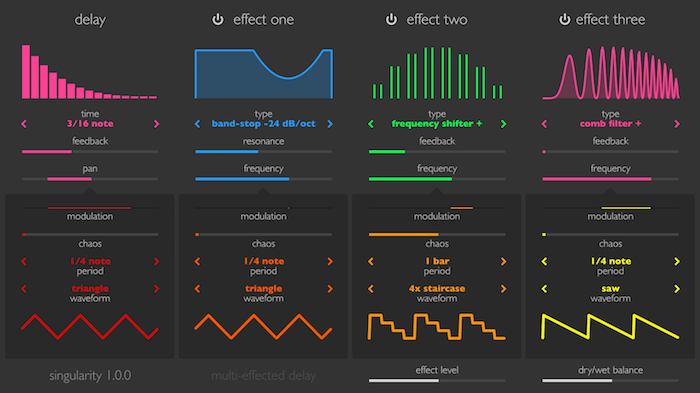 As always with Sinevibes plugins, Singularity’s user interface is built using high-contrast, colour-coded elements with lively animations and efficient rendering. Delay, effects and modulators feature interactive graphics which let you understand what’s going on just after a quick glance. Together with thoroughly calibrated parameters with realtime smoothing, Singularity is a bliss to operate in any environment – and in any mood.