Torsion is a monophonic Audio Unit instrument plugin built upon a unique combination of multiple synthesis technologies and modulation sources, wrapped into an intuitive interface which makes working with it as fun as playing a game. It has a very distinctive, original sound character – and is ready to push your musical creativity in a fresh new direction. 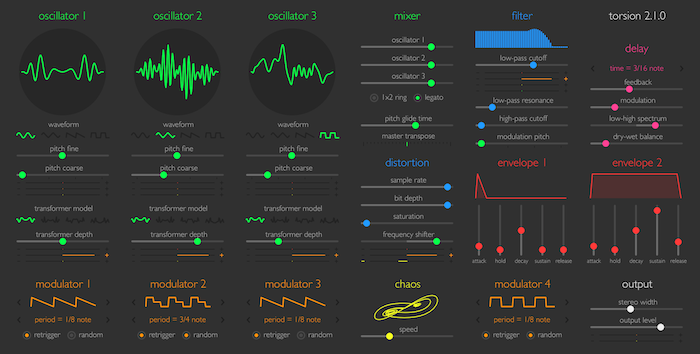 Reinvented classics. At first glance, Torsion's sound structure is similar to a traditional subtractive synthesiser – three oscillators going into a low-pass filter and into an amplifier – and it's certainly as easy to use. But Torsion's oscillators are completely different: they produce simple additive waves based on just a few partials, which are then enriched with lots of new spectral content using a wave transformer, which literally "curls" the wave in real time. To further spice the sound up, it offers a vast array of effects – including frequency shifter, filter FM, delay, and more.

Modulation galore. Torsion features as many as four separate LFO generators - one for each oscillator and one for the filter and output amplifier. In addition to precise synchronisation, each LFO cycle can be self-randomised, which makes the modulation rhythmical yet non-repetitive. There are also two AHDSR envelope generators, as well as a two-dimensional chaos oscillator.

Interactive experience. The interface of Torsion is designed with high-contrast, colour coded elements, which lets you operate the instrument intuitively in just a few minutes. It also includes graphic representations for every building block – oscillator and LFO waveforms, envelope shapes and filter spectrum all change as you modify them, making sound design with Torsion a truly engaging, fun process.